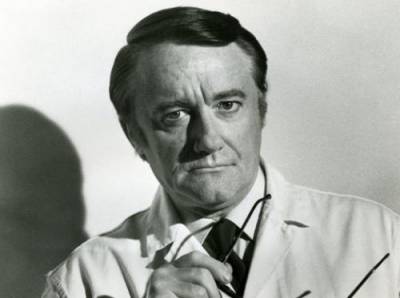 When I asked Robert Vaughn for an interview he told me to give him my phone number, and he would call me. I wasn’t sure if he really would, but a month later, he did call, and of course, I was not in. I figured that was the end of that, but another month later he called again. I was on my way out this time, but certainly cancelled my plans. I asked him to hold on while I got out my questions, and when I put the receiver down, I thought, "This is definitely a man of his word."

Vaughn usually plays the bad guy in most of his film and television projects. As with many actors who do these roles, he is actually a very pleasant and intelligent person with a quick, light-hearted sense of humor. But unlike others who may fret over being typecast, Robert Vaughn is able to put his career in the proper perspective.

"I would like to play a vulnerable, normal person, but I don't get cast that way. The first movie I did after U.N.C.L.E. was "Bullitt", and I played a villainous, white collar guy. Then ten years later, I did Washington: Behind Closed Doors and won an Emmy. That's what solidified me."

Eternally known as television's Napoleon Solo from the classic series The Man From U.N.C.L.E., it is ifascinating to learn that Vaughn pursued a doctorate degree in communications at the University of Southern California during the height of the show's popularity. The difficult thing to understand, however, is how anyone could take on such a tremendous achievement as earning a PhD while working on a weekly television series with a grueling schedule.

"It's like the old saying that a drunk uses-- 'It seemed like a good idea at the time.' Now I'm not so sure why I did it."

Even if he did not have the higher education, Robert Vaughn would sound wonderfully articulate anyway, since he possesses one of the most easily recognizable and resonant voices in acting. It is a gift he put to good use when he gave speeches as the national chairman of Dissenting Democrats, an organization that opposed the war in Vietnam.

"It was the lead story on the news for five years. In particular, at colleges, there was ongoing chaos. Hardly a day went by that there weren't demonstrations somewhere."

As far as the future goes, Vaughn is still working on his long-awaited autobiography.

"I've been fiddling around with it over the years, but I have two young children who are very active in sports. So when I'm home, I'm too busy driving them to their games."

Also, don't believe those rumors about another Man From U.N.C.L.E. reunion movie.

"It's just not in the cards. There was a discussion that Ted Turner was talking about doing a Man From U.N.C.L.E. movie, but David McCallum said that he was not going to do it. We did the pilot over twenty-five years ago, and I think we're a little too old for that now.”

Because he has been acting since he was a child, Robert Vaughn is one of those rare actors who can successfully work on such diverse projects as a one-man play about President Roosevelt entitled FDR, B-rated genre movies like C.H.U.D. II: Bud The Chud and River of Death, and an Oscar-nominated performance in The Young Philadelphians, without ever compromising the quality of his craft. He is also fully aware of the perils that come along with agreeing to do certain projects.

"I've been on some horrendous locations where the conditions were so bad. So, you want to know how much you're going to get paid for being there. If it's just a paying job, you should know if you're going to have to live in a tree."

When bombarded by admirers, it is nice to see Vaughn give countless autographs and sign all the U.N.C.L.E. memorabilia with unwavering patience.

“It’s not a problem, except in major cities when you are doing something big. But when you're not on a series every week, your stardom tends to diminish."

Of course, he does draw the line when it comes to those annoying lists of celebrity home addresses which are sold through mail-order services all over the country.

"It's an awful invasion of privacy! The Screen Actors Guild recommends that you don't answer it, just have the mail sent back. Otherwise, it confirms that you live there.''

Although Vaughn works on as many projects as he can, he is dedicated, first and foremost, to his family, and does not allow acting to be the be-all and end-all of his existence.

"I get much more enjoyment from watching my son play hockey," he says proudly.

So when you want to know what is really important in life, or you think that there isn't anybody who does know anymore, just take a good look at Robert Vaughn. AAA