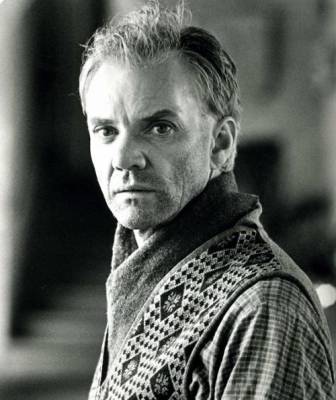 It is so ridiculous that some people believe Malcolm McDowell is as violent and insane as many of the characters he has played. Almost everyone who found out that I would be interviewing him had expressed fear and concern. (My favorite overreaction was "Are you crazy?! Didn't you see Caligula?!") How shocked they all were when I told them that McDowell is actually an extremely gregarious, charming, and normal man.

We met on April Fool's Day and did our interview in a little eatery a few blocks from where he had just finished a performance starring in the American Jewish Theater production of Ronald Harwood's Another Time. As we were leaving the theater, everyone who wanted to meet him or get an autograph did so with so much caution and tentativeness that McDowell had to be the one to say hello, or extend his hand, first.

Midway through the interview, he stopped the recorder so we could just talk, and our conversation wound up lasting longer than the actual interview. After a while of discussing our families, our dogs, and our similar tastes in music, it felt more like I was catching up on old times with my "Uncle Malcolm” than having an initial introduction to someone I had only met three days earlier.

My first impression of McDowell is that he is a man who is truly at ease with himself--he doesn’t just walk down the block, he swaggers with the utmost confidence--and the thing that struck me the most about him is that he possesses the most impeccable manners. He protectively held my arm when crossing every street, offered me his food, and leaped out of his seat to order me something at the counter rather than call the waitress back to the table.

Malcolm McDowell is an incredible actor who has entranced audiences for years with his memorable, ground-breaking film performances. He plans to be back again at AJT this March in a play entitled Singer. His recent stage activity is much to the delight of New York theatergoers, who previously had not seen McDowell onstage since 1984.

"I've just been doing a lot of movies, and I've been working a lot in Europe. Also you know actors subsidize the theater, so you have to wait until you've got a film to do or something that's paid for the year. That's the only way you can do it. I'm really looking forward in the next few years to doing a lot more theater and really putting together some good parts.

"Also I like working in New York. There’s rawness about New York which I have always loved. Even though I don't live in New York, I feel like I'm a New Yorker. I always feel at home here. Always! What I don't like so much now is the weather. I love California's weather. It's warm. Driving your car. I like all that. I have a bit of land, and I just go marching around with my dogs. I play a lot of tennis. It’s like my creature comforts now. I'm getting soft in my old age!" he jokes.

Soft is not a word that most folks would call McDowell after seeing the majority of his performances. Without bothering to distinguish between the man and his roles, he has been labeled “spooky," "crazed," "abrasive" and the ever-popular and overused "intense" for over two decades. Even his eyes--an indescribable shade of blue that spills over the rim of the iris--have been commented on so much ("strange, "startling," "difficult to read," etc.) that you could write a dissertation on them! To have this kind of effect on moviegoers would make a lot of other actors uncomfortable, withdrawn, and even doubtful of their ability to do anything else, but not Malcolm McDowell.

"I started doing very strange movies that weren't really mainstream, but became mainstream because they were so wonderful and good. When I did If..., it's not really a mainstream film, but it got great success. That was my first film, and I played sort of a rebellious character. And I've been stamped as the rebel ever since.

"Also Clockwork Orange was a very powerful, overpowering movie in many ways to the sensibilities. It still is, and-" His next words are said so ingenuously that the look on his face seems to reflect a first-time realization. "I think that people believe I'm really like that.

"One can be a little upset about it. But on the other hand, one can say, 'Well, if I made them believe it to that extent, I did my job properly.' See, you can't get too pissed off. It's a waste of energy. The more you try and shake it, the more it sticks to you. Just let it happen. I'm very proud of the movie, very proud of my work in it. On to the next. End of story."

At the time when McDowell was starring in those films, the media painted a picture of him as the Angry Young Man. Whether this was largely generated hype to make him appear to be the same person as the characters he played, or an accurate take on his persona, is beside the point. What matters is that the Malcolm McDowell of today is a notably wiser, more mature human being. He can look back without any regret, and he is grateful for the position those roles have put him in.

"I think they were right because when I had these huge hits I was very mistrustful. I thought everybody was after something, and usually I was right. You're a young kid, and they're telling you this, that, and the other in the press. You get misquoted, and they write rubbish about you. It's just nonsense.

"But I hope one has learned a little humility. When I was a young actor, I thought that I could do anything. Which is fine. I think that everybody has to go through that. Then of course you get knocked down, and the thing is have you got the character to get up? That's the big question. And if you have, then fine. On you go. You make the best of it, and just do some good work hopefully.

"I know I have a pretty good life, and my professional life couldn't be better. That's something one should never ever take for granted. I get paid a lot of money for what I do, and I enjoy it. How many people can say that? Not many. So I'm very lucky."

Over the past several years, McDowell has appeared in numerous horror/science fiction B-rated thrillers and made-directly-for-video movies. People who have always admired his work may be perplexed, or even a bit disappointed, with some of his choices of late. But good or bad, McDowell doesn't feel a need to justify them because like most of us, he makes decisions out of necessity.

"I spent maybe ten years doing very little. I was married, and I had young children at the time. I didn't really want to schlep off to do these movies. I didn't want to work, but it was only because I had better things to do—bring up two kids. I didn't work like I do now. I just go from one project to another. And some of them aren't good, but of course one can't do great things all the time. There aren’t the writers. There are not the directors. And all the good movies go to five actors that are bankable. They get every script whether they're right for it or not.

"So in the good years when you're 'hot,' you're shoved by every advisor you have--agent, accountants, lawyers--to 'Do this! Buy this house! You've got to have a tax write-off!' Then suddenly next year, there's nothing. Well, what the hell are you going to do? You have to suddenly be responsible. It's not like the old days when you could say, 'I'm not doing that. I don't believe in it.'

"Another thing is that I have to work. I have to pay child support. I have to pay my mortgage. I can't just sit around. And I'd rather do a bad movie than a bad TV series 'cause the movie's a lot shorter."

When stuck with bad material, many actors easily feign ignorance as to their project's lack of quality. McDowell, however, balks at the current "But-they-told-me-it-was-gonna-be ..." trend.

"That's bullshit," he states, waving his hand in disgust. "You'd have to be a fool. You know going in you just have to make the best of it you can. But listen. How many actors in their career can boast If..., 0 Lucky Man!, Clockwork Orange, Time After Time? Just one of those in a career, I would have been happy with. I've gotten to make some terrific films. I am privileged. I got lucky, and hopefully the best is yet to come."

Hearing him say all of that brings to mind an old quote that a legendary baseball player once said--"It ain't braggin' if you can do it." In Malcolm McDowell's case, that is unquestionably true. AAA