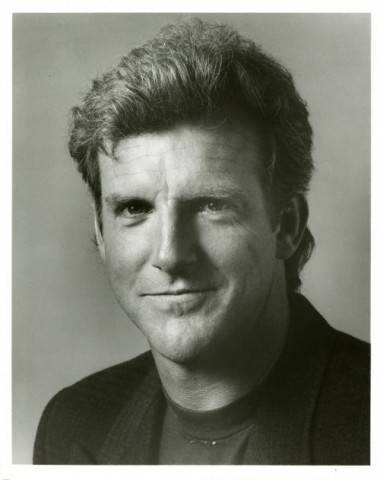 Where: his dressing room (Circle In The Square Theatre). 4:15 pm.

One of the great things that I discovered about Jamey Sheridan during our conversation is that he does not have any tolerance for Hollywood-type nonsense like indulging manipulative actors or catering to the lowest common denominator. He will simply walk away and stay away from such situations, and he handles himself in the best way possible.

This philosophy extends to doing interviews, in which he has always been a reluctant participant. So I knew I was lucky to get him to agree to one, and my first question was a response to a question that he had posed to me.

TH: I was very surprised when you asked me why I wanted to interview you. No actor has ever asked me that before.

JS: Why? (laughs) You mean actors just assume that people want to interview them? Usually interviews scare me, so I have a way of sifting through them, and I try to say no most of the time.

"I don't mean to complain, but having a conversation with someone, and then having it come out in print is almost always a shock. There are people who do interviews very well, and who are very true in their representation when they print it. Then there are people who are not. I did one that really hurt my family a lot because it was a matter of things being out of context. So I don't know who I can trust, and who I can't.

"It's hard to fight it because a lot of people will tell you, 'Well, this is what our readers want to know, and I'm going to get fired if you don't tell me this.' People manipulate the hell out of you to try to get things that can hurt you."

TH: That's true because I was talking to this woman who had some interviews published in whatever women's magazine, and she told me that she had to ask these actresses mandatory questions about their underwear. All of her questions and research and tapes had to be submitted. I was shocked! Nobody listens to my tapes.

"But when you don't have any idea what publicity is, some guy comes along and buys you a beer, and pretty soon you're trying to think of something to tell. I don't lie about anything, but it's a machine that does not care if something is a lie or not. And to me, out of context is a lie.

"That's why this is a scary thing to get into because when some interviews are printed, there's no tone of voice. The writer has to say, 'he said joking.' If the writer doesn't say that, half the jokes in the world are going to sound like suicide. That's exactly what they did with that one that I was talking about. I was telling these things about my life as a joke. Then these ridiculous things that I did came printed out like I was a criminal because there was no tone of voice, and it made it sound overblown.

"Some people have a tougher skin than me. They will have an interview like that come out and say, 'It was totally out of context. I got killed. So what?' They can deal with that, but I'm not that good at it. I get stung real easily."

It looks like publicity is going to be a necessary evil for Sheridan as his career escalates on a steady path. When told that audiences enjoy watching an actor like him take actual steps towards improving his status and craft, he lets out a loud, happy laugh that sounds more like it should come from someone who is being tickled.

"Yeah! Baby steps! But that's fine. I am amazed anybody knows who I am anyway. When I was nominated for a Tony, at film auditions they would say, 'Well, he's only a theater actor.' Then you do a series and three films, and you're only a film actor. Who cares? Who gives a shit? It doesn't bother me.

"I figure I'm getting better. I probably would have liked to have had more work to do earlier, so that I could have learned because I feel like you only learn by working." He stops himself and rethinks his position. "Well, I don't know about that. In some ways my work's gotten better just by living more because I didn't start acting until I was 27." He lets out that laugh again. "And I wasn't very good when I started!

"I'm happy with the way things are developing. I can't complain about anything because I left home when I was 18, and I had almost ten years of doing lots of things. I drifted for a long time. I had three different majors in college. I took six years to get through college because I quit. I tried acting once. I quit. I went to the islands. I came back. I tried something else for a while. Tried writing. Went traveling again. Tried acting one more time. Quit. Decided it was full of shit. Went traveling again.

"The biggest issue for me is responsibility. If I saw somebody do something in a movie that I'd ever done in life, I'd know if they didn't get it right, and I would be angry.

"If the person has a given job, you should want to know how the job works and what price you have to pay to do that job, emotionally and physically. I enjoy all the details I can find, but doing research can be difficult. It is a pain in the ass, especially if I've got to talk to a man who's dying of cancer, and he has got the guts to let me in his room. What am I supposed to say? 'Oh, hi! I'm a pretender for a living. I'm a professional fake, and I just want you to tell me all about dying!’" he mocks cheerily. "I want to know, but the price that people pay to give something like that is often high, and I just admire people in the real world who are willing to share things with me."

TH: What about just going by the script? Because--like with Distant Thunder, for instance—you played a lumberjack, but you were never seen doing any lumberjack stuff.

JS: But I got to go up in the mountains every day for two weeks and learn how to cable a timber and bring it up the hill and all that stuff. I had a ball!

"I want to go find out this stuff. I feel like I'm lazy if I don't. Maybe I'm afraid I can't trust my imagination completely, but it's just back up. In a lot of cases, it's really fun. My dream as an actor would be to play a sailor or a spy or someone like that, and then get to go do it. At least half the fun would be getting to do that stuff."

Although Sheridan likes to have fun with his work, he is very serious when discussing what qualities he believes make an actor great. Raw talent ranks up there for him, but not nearly as high as perseverance, stamina, and longevity.

"In this culture, we emphasize youth too much, and it makes people say silly things like, 'I've just turned 28. I'll never be a genius.' Who gives a shit about genius anyway?

"I admire people who deliver for thirty, forty years, and as I get older that becomes a real powerful thing to me because I understand what Olivier meant when he said that the most important thing in acting is stamina. And not just stamina to deliver one role, or to do eight performances a week. It's stamina to perform for fifty, sixty years, so my values are different. An 18-year-old kid can give a great performance, and I'll love it, but I'm just focused more on longevity."

TH: So are you one of these "Hey, kid. Stay in your place" types?

JS: No, I don't feel that way at all. I love watching young people work, and sometimes I'm shocked at the wisdom and maturity in their work. No doubt about it. But that's gone for me, and I'm living with the fact that I'm just plugging away. I'm- (stops himself, then blurts out) I'm not a big deal.

JS: Well, it's true. I work hard at what I do, but I'm just a journeyman actor. I look for ways to sustain that, and I do not intend to be crushed by some fate that I'm asking for as opposed to the fate that I get. Whatever it is, I just want to be ready. Am I making any sense to you?

JS: What if it doesn't happen?

TH: What do you mean? (starts to get angry) I don't want to think about that. I cannot imagine pursuing something else.

JS: Then you'll have to learn how to sustain yourself. All I'm really talking about is how do you keep your dreams when the price gets higher as you get older?

TH: Jason Robards told me that he didn't even make a living in this business until he was 35. I just can't fathom that.

I don't if it is stamina, maturity or insanity that makes one keep their seemingly impossible dreams alive, but I suspect that those words of wisdom from Jamey Sheridan can help anyone. AAA

© Copyright 2021 All About ACTORS All Rights Reserved. Photo provided by the actor or his representatives