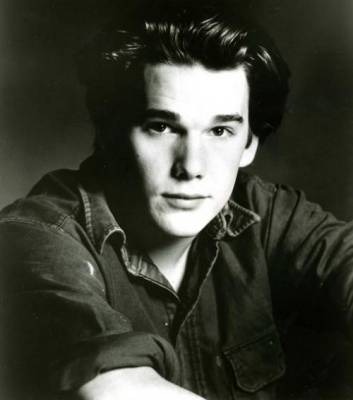 Where: a couple of orchestra house seats (Lyceum Theatre). 6:30 pm.

When we met up again later, we two strangers walked in silence down the long backstage corridor until he queried, "What's your name again? Lisa?"

I told him my name, and an amiable look came over his face. He pointed back and forth and said, "So I'm Hawke, and you're Hawkins."

"Yep. We've got that mutual bird thing going on," I joked. He smiled at that, and then I knew the interview would go fine.

We sat out in the house seats because I was too afraid to climb the rickety stairs up to his dressing room on the top floor of the theater where Hawke is currently starring in the National Actors Theatre revival of Anton Chekov's The Seagull. His dedication to his profession and his success at playing many diverse roles since his teens are praiseworthy. So it is surprising to learn that becoming an actor was not initially a conscious choice for him at all.

"It wasn't a decision really. It just kept happening. I wasn't good at too many things, and this is something I was good at. It just kept reoccurring in my life. From the first time I did it, I really liked it. When you really like doing something and you're good at it, it leads you. Well, not always," he rethinks. "That's not really true. It's just in the certain situations it happened."

Hawke offers a bit of history: "I took an acting class when I was about twelve or thirteen because I didn't have a sport, and a guy came in to teach us improv. After the class was over, he asked me if I wanted to do this play. So I said, 'Sure!’ and had a really great time. I met some people that knew about auditions in New York, and I said, 'Yeah, I'd like to go on those. That'll be fun.' My parents wanted me to get it out of my system, and I went and got the part in Explorers.

We stop with the Ethan Hawke history lesson to watch the stage crew set up for this evening's performance. Hawke begins to discuss the challenges that are unique to performing the unprecedented writer's work.

"It's really hard to be good eight times a week doing Chekhov. It's very difficult. His goal was to put life onstage, so he writes these plays that don't tell any kind of conventional story. Your job as an actor is not to unfold some plot. It's all people's internal journey. It's what's incredible about it. All the symbols and the dialogue and the events of the play are so open to interpretation that it requires a lot of you. The writing is so great that you can basically only fuck it up. You can never reach the level that it's on. You've got to go out there and just be open."

When not doing a movie or play, Hawke can usually be found working with a theater company he helped start called Malaparte. ''It's the title of a French novel that was published unbound. You could read it in any order. The idea being it's not about plot or structure, but it's about the experience. That's why we named the company that.

"The attempt is not to be any kind of flashy organization right now. The attempt is to try to give my friends and I a place to do the kind of work that we like to do that we don't often get the opportunity to do and exercise our own ideas. Also it's fun. Everybody knows each other and is forgiving for whatever you do wrong. You do a play in this hundred-seat house, and all your friends come. It's really true community theater. We meet every Sunday, read a play, and we all just fight over who gets to be in it."

Ever since someone coined the phrases "Generation X” and "slackers" to describe the current generation of folks in their twenties, it has been all too easy to dismiss us as a lost cause. The stereotype is further fueled by "hot" young stars who try to hard to be an image instead of a person, reveling in their "angst-ridden," "brooding," "oddball” tags. But there is great hope in the likes of Ethan Hawke and a handful of other young actors whose work and attitudes evoke words such as "secure," "concerned" and "mature." A prime example of this occurs while Hawke is telling a story and suddenly stops in mid-sentence.

"I don't know if I should be talking about this. This probably should be off the record." (Upon review of the cassette, I conclude that it should be kept out of print.) I suggest that he shut the tape recorder off, and he gazes down at my old Panasonic that is sitting in his lap. Instead of changing the subject or pressing the STOP button, his next move is completely surprising. He looks back up at me and stares directly into my eyes, seemingly probing for an affirmation of trust. Then a small smile of recognition appears on his face as he says, "Well, use your better judgment," and he continues his story over the open microphone.

Another one of the differences that separate Hawke from his "Young Hollywood" counterparts is his staunch reluctance to allow himself to be turned into a teen idol. Industry executives have been salivating dollar signs over the appeal of his innocuous eyes and fresh, baby face since the release of Dead Poets Society.

"I'd just be like, 'Nnnnoooo!'" Hawke exclaims, flailing his arms to push away any notion of what could have been--Ethan Hawke posters, calendars and pillowcases, frenzied shopping mall appearances, and the inevitable Ethan Hawke Pinup Magazine: The Official Collector's Edition!

"That was just my reaction to it. It's really eerie. You don't want things like that to get in the way of the work you want to do, so you have to be careful. I'm handling it the only way I can handle it. I don't have any kind of big agenda or grand scheme.

"It's funny though because you don't want to take yourself too seriously or else you'll end up being miserable. You have to have a sense of humor about how all this isn't that important. But on the other hand, the great line in Reds says, 'If you don't take yourself seriously, who's going to?' So it's weird. There are people who I believe have done much worse work than I have who have gotten great parts because they have done great publicity. And you go, 'Oh, my God! I should have done that,' or 'Why didn't I do the cover of Sassy magazine? Then I would have gotten that part!'"

No matter what part he gets, Hawke believes all actors on a set should be there to make a good film, and not for the self-absorbed purpose of emblazoning one's ego on celluloid.

"It's important that when you're doing a movie you're creating another world. It's like the Godfather films. You feel like that world exists, and somewhere there's people living and behaving like that. The actors were all in the same world. In A Midnight Clear we were very conscious of trying to create a world that we all existed in, all our styles. It's a very low-key performance level. Nobody in that movie was trying to be showy. That was the idea. Whereas some other things call for everybody to be flamboyant, and you can get away with outrageous behavior and choices on the same level. It all lives in that world.

"A lot of the times, somebody's performance could be great--in another movie. It's a question of 'Are you there to serve the piece or serve yourself?' Sometimes the piece calls for you to be as interesting and dynamic as possible. Sometimes it calls for you to just tell a story."

A lot of actors do not like to reveal their own difficulties and limitations with the craft, but Ethan Hawke welcomes a discussion about concentration and focus and how they can make or break his portrayal of a character.

"It's important for me because I can be really sloppy. Sometimes I can be overconfident to a point that I'm just being messy. Whenever I really think things through, I can do very well. I can also not think through things, and one of the great blessings about working with somebody like Peter Weir with Dead Poets Society is he makes you focus. He'll ask you a question--'So what are you thinking now?”--and you work out your whole inner monologue and do all this actor garbage that's different for everybody.

"When I talk about focus, I talk about being able to do that for myself because you work with other people who don't know how to do that for you. It's tied in with having an intellectual understanding of the piece and what important qualities the character has that need to be told to the audience because they influence his behavior. And making sure that things about me and who I am don't get in the way. Then you approach the work in the way you should. Just open and go for it and be alive and awake and react off what you can.

"See, the thing is I know when things don't work. I just wish I was a little more confident about it to articulate it, and I am talking very generally because I'm thinking of specific things that don't make sense to anybody else. I'm still figuring it out. I have yet to know exactly what I do differently when I'm really sharp and when I'm not. You can watch it in your film work. I can sit and watch A Midnight Clear, and there are a couple of scenes in that movie that I'm focused in and really good. If I was that focused the whole way through, it would have been a lot better. Watch somebody like Pacino in Dog Day Afternoon. That's what I mean by focus."

As Hawke gets older and acquires more acting experience, he has decided that he really does not want to waste his talents in mediocre film projects.

"There's nothing wrong with it if you like to do it or if you need the money. But what I'm starting to realize is that this is my life, and spending my life doing something that I don't respond to or believe in makes me really depressed.

"I'm not saying that I'm above anything, and I don't mean to be pretentious. But this is how I spend my life, and I want it to be about the things that I care about because a lot of times the truth is I would be happier and my time would be better spent going back to school or traveling or doing my theater company than it would be to do a stupid movie that I didn't like. And I want to focus my life on--" Hawke stops and smiles, realizing what he just said.

"There's that F-word," he snickers. "That's not the only F-word that gets said!" After laughing a little bit, he regains his composure to sum it all up. "Right now, I just want to be the best actor I can be." AAA

© Copyright 2019 All About ACTORS All Rights Reserved. Photo provided by the actor or his representatives