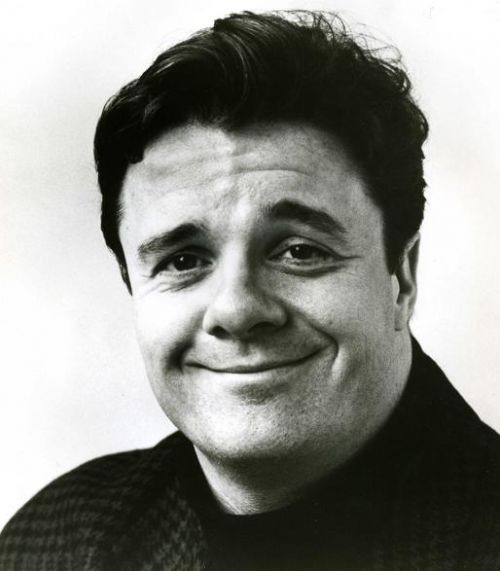 Right before a Wednesday matinee of Guys And Dolls, I interviewed Nathan Lane. As I was setting up, I told him that I had wanted to ask him for an interview for years. However, each previous time was inappropriate because there was another actor in the show that I wanted to interview, and I didn’t want to choose between the two of them. Then when Guys And Dolls came about, I guessed correctly that Peter Gallagher, his former co-star, would leave sooner, which enabled me to wait a few months to ask Lane.

Other times in the past, some actors were insulted by the fact that I had asked their co-star for an interview first, but not Lane. He was thoroughly amused by the whole situation.

"First Peter, now me. We can’t get rid of her!" he joked to the wardrobe man ironing his costume. "She won't be satisfied until she’s interviewed the entire cast!" And that's pretty much how the rest of the interview went. Lane constantly cracked jokes and made me laugh as I tried my best to hurry through my questions so he would have time to prepare for the two and a half hour show. When we finished he had about twelve minutes to go until curtain, but he was still incredibly relaxed and affable.

When I told a writer friend how the interview went, he shook his head and scolded me about "letting your subject take control of the conversation."

"What control?" I countered. "We were having fun. And he's not a 'subject', he's a person!" I decided right then and there that I should stick to talking to guys like Nathan Lane, and not insecure journalists.

Lane is a witty man who makes jokes that are never overly sarcastic or mean-spirited. He possesses a rare sense of humor that you wish everyone in the world had. I witnessed it right at the start of our interview when I mistakenly asked him about the Tony Award that I could have sworn I saw him win last June.

"Did you just come to depress me? No, I didn't get that. I got the Drama Desk. That doesn't spin around. It's just a block of wood," he chuckles and then flashes an understanding smile at me that seems to say, "Hey, you just said something stupid, but that's all right." I begin to apologize, and Lane seizes the moment.

"I was nominated. And you know, 'lt’s an honor just to be nominated!' I really didn't care about winning. Maybe you wanted to interview Faith Prince? She's on the other side of the building. She's got the thing that spins around.”

With that initial awkward episode out of the way, Lane talks about his upcoming projects and, of course, his almost year-long experience doing Guys and Dolls.

"It was great to play Nathan Detroit and work with Jerry Zaks and all these talented people. It's been wonderful and very gratifying.

"In September, I go into rehearsal for Neil Simon's new play Laughter On The 23rd Floor that Jerry Zaks is directing. I have a movie I finished called Life With Mikey with Michael J.Fox. Then I'm still working on an animated film called The Lion King."

Not to be left out, a television network had also offered Lane his own show. "I had a deal with FOX, and they very nicely let me out of it so that I could do this Neil Simon play. So I walked away from a lot of money to do another play!" he jokingly yells into my old Panasonic tape recorder. "So no, I'm not going to be doing a pilot. But Faith will be doing a pilot!” he teases. "You may still want to talk to her. She's on the other side of the building!”

As the now famous story goes, when Nathan Lane first started out in the business, he could not use his real first name because another actor was already using it professionally. Lane decided to name himself after his Guys and Dolls character (which he had also played back then), and he has been comfortable with his choice ever since.

"It was slightly strange in the beginning when people would call me 'Nathan.' But Nathan's been my name now for a while, so I'm used to that. It's actually strange to hear people call me 'Joe.' It's only my family and very old friends who call me Joe." When told he looks more like a "Joe," he bursts out laughing. "I don't know what to say to that!"

Even though he is only in his mid-thirties, audiences feel like Nathan Lane has been around for a long time. This can be attributed not only to the fact that he is constantly working, but also because while many of his peers were partaking in formal training or higher education, Lane was already getting jobs.

"I took a summer crash course, and it was really just sort of arrogance that said it was too abstract for me. I went into the business out of high school, and I had been working as an actor. So I knew what that was like, and this seemed not of much value and certain exercises were silly. But I was very young then, and now I think there's value in any kind of situation were you're allowed to get up in front of a group of people and experiment. You have to have some sort of a foundation and understanding that there is a craft, and you do develop a technique.

"What happens with some people is that it can get out of hand, and it becomes either self-indulgent or some psychological exercise. Every night is not going to be magical and inspired. You have to be able to have something to fall back on to find the basics or tell the story every night, and to keep that truthful. But every night you're not going to give some brilliant performance.

"Then a lot of it comes with experience. You just have to get up on a stage night after night to get better at it. To do it in front of a large group of people. That's really how you learn how to act."

Whereas many of his peers want to test their worth by playing in as many genres as possible, Lane does not need to prove himself to anyone. He enjoys playing comedic roles and harbors no resentment at being offered them consistently.

"I'm basically a character actor. I don't feel any desire to play Hamlet. Obviously, I've done a lot of comedy, and it's something I do very well. But no matter what you do, people tend to label you. But I don't feel typecast, and I love everything I've played.

"Comedy is very difficult, and most comedy comes from pain. I mean something like Guys and Dolls is pure entertainment and fun, and we're out there having a great time. But this character in the Neil Simon play is in a great deal of pain, and he's very self-destructive. Even though I think people will laugh a great deal, I find that he's a very tortured character. So you can't go in playing for the comedy or the laugh. You find what's going on inside of him, and out of that comes the comedy of it.”

If you're one of the unfortunate folks who has not seen Lane in Guys and Dolls yet, you may recognize him not only from several recent films, but also as the guy with a severe cold who's "gotta get some rest" in the Nyquil commercials.

"One of the Nyquil commercials I had done a long time ago when we were in previews for Guys and Dolls, and they asked me to do another one. I had really stopped doing commercials, but they paid me a lot of money. So there! I can sell out, too!" Lane jokes. "But it's difficult because it's just a commercial. It is what it is. It's going to be a thirty-second spot no matter what you do with it. There isn't a lot of time or room for interpretation or playing around. Hopefully, you try to inject some humor in to it and have fun with it."

Much to the delight of New York theatrical audiences, Nathan Lane has done the vast majority of his projects here rather than going to Hollywood to make fast bucks.

"I just felt that if I went to L.A. and stayed there that I really wouldn't grow as an actor. I felt I would fall into a sitcom where I was someone's next door neighbor, or have my own show. And unless you're very lucky, it's rare that you're able to find a television show that's well-written. But you're very easily seduced by making money.

"I've been able to do a lot of plays, and people have said to me, 'You're the only one I know who works in the theater consistently.' And it is because I stayed!" Lane laughs heartily. "You all left! It was me and a couple of other guys who wanted to stay.

"It's a big financial sacrifice staying here, but this is really what I wanted to do is theater. I would like to have more of a film career. That seems to be slowly happening. Television would be great because I'd like to do something of quality, and where I have some say in what it's about. But I think there's always time to settle down and do a television series because if it goes well, then it could be on for a long time.

"I guess it's very rare these days to make a name for yourself in the theater. I'm sort of an example of someone who hung in there. I'm certainly not the first name that comes to mind in Hollywood. I'm the last name!" he jokes. "The only reason I did this movie Life With Mikey is because the studio wanted everyone but me!

"I'm just very happy that it worked out. I had the opportunity to do it, and Michael J.Fox and I hit it off. And it's a dream to originate a role in a Neil Simon play. So I don't know. It's 'The grass is always greener,' you know? Someone's always got something you want." AAA

I really enjoyed this. Been looking up articles on Nathan from the 1990’s so this was truly a wonderful read. I admire his dedication to theater. I didn’t know he had a TV deal but let it go in order to continue working on Broadway. Glad he has won three Tonys by now. One of my all-time fave actors. Thanks for the interview.

0 Cancel Reply
I really enjoyed this. Been looking up articles on Nathan from the 1990’s so this was truly a wonderful read. I admire his dedication to theater. I didn’t know he had a TV deal but let it go in order to continue working on Broadway. Glad he has won three Tonys by now. One of my all-time fave actors. Thanks for the interview.
Cancel Update Comment