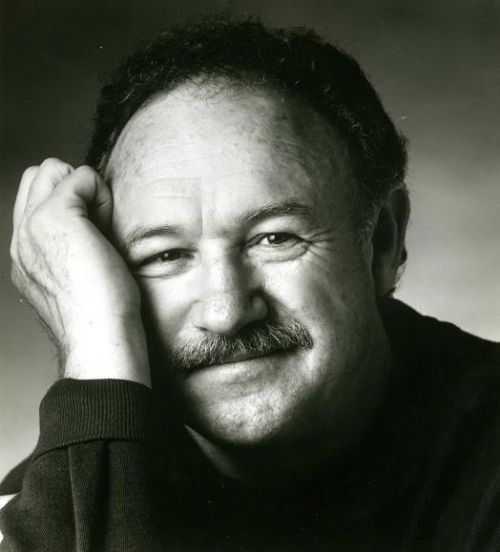 Much to my surprise, I felt so immediately at ease doing this interview that I didn't bother to segue from question to question in the numerical order that I had them in, and spent more time than usual joking around and trying to make Gene Hackman laugh. I was surprised to see that when we finished I still had half my tape space left, so this turned out to be the shortest interview I've ever done. Then as I was leaving, I asked him if we could have one of our announcements posted backstage, and he pinned it up on the company bulletin board himself.

When I told a friend how the interview went, she suddenly stopped what she was doing and said, “Wait a minute. You had Gene Hackman hanging up flyers for you?!”

"Just one," I said, not realizing what she meant. I guess in the back of my mind I knew that I was dealing with a man who has been a major-league movie star for over twenty years, but he never made me feel that way. He has a wonderful way about him that automatically makes you forget who he is, so you can't help talking to him like you would anyone else. Besides, I like being able to think of him as a cool guy first, instead of just as a great actor.

Hackman is currently starring on Broadway with Richard Dreyfuss and Glenn Close in the Mike Nichols-directed play Death And The Maiden. This may be Hackman's first stage appearance in quite a long time, but it’s been an equally long time since audiences have seen three actors of this caliber share the same theatrical space.

"We're aware that when people come to see the play that they're also coming to see movie stars. We would hope that the play and the acting are good enough that they will--after the first fifteen minutes of saying, 'Oh, he's tall and he's shorter,' or whatever--get over that. Then they would eventually think that we were okay actors, and that we were fulfilling the requirements of the play.

“It’s been about 25 years since I've been on the stage, so it’s a big adjustment. Although we work in front of people in films, there are not a thousand like there are eleven hundred people here everyday. I had to work on my voice early on, just to get the strength back that I used to have."

Having Hackman onstage is also an adjustment for audiences who are accustomed to seeing his image on a movie screen, so a lot of people have been standing around outside the stage door hoping to meet him for the first time. Actors understand that this is a part of the ritual of going to the theater for some audience members. Yet, unlike other admirers who speak disrespectfully to stars or follow them down the street, most folks who wait for Hackman seem to care genuinely about him and worry about whether or not he will be nice to them. Such fears can certainly be put to rest because Hackman is the furthest thing from snobbish or arrogant.

"I found that it’s easier to be nice to people than it is not to be nice to them. It takes more of a toll on the people who I see being rude to people on the street than it does on me. To me, it’s tiring to do, so sometimes I sneak out of the theater. But if I'm out there, then I'll deal with them. I don’t mind people if they're nice. Many times, if they're rude or pushy, that thing kind of annoys you.

"I guess you just have to realize that after so many years that people really think that they know you just because you've been around for so long, but it's nice that people are concerned about you."

For those of you who will not be able to see Gene Hackman in Death And The Maiden, you can catch him on movie screens this August in a new western called Unforgiven.

"It’s a story that’s been around a long time. It was sent to me originally by Francis Coppola years ago. He wanted to do it, and then it just kind of fell apart. Then when Clint Eastwood decided to do it, he called me. My role is the role of a sheriff in a town where there's a house of prostitution, and there's a stabbing that is kind of let slide. So, the girls that work in this house decide that they will put up a bounty for anyone who will come to town, and get rid of these two young guys who cut their friend up."

With a new movie out, it may mean that Hackman will be asked to talk about it on television programs and in publications. He has been doing the "shoot the movie/do the publicity for it" game for the past thirty-five years, and it is a process he is not very fond of.

"My least favorite thing in the business is having my still photograph taken and doing interviews about films or about my work. It's very wearying, and I do very little of that anymore.

"Also, you go on these junkets. You go to a town like New York, the actors in the film and the director. Then you go to this hotel, and they may have a hundred people from the press there. So what you do is you sit in a room a whole day, and they have a television camera. Then these people come in and spend five minutes with you, and they ask their questions. Then they give them that tape of their interview, and they take that back to their local television stations. So the movie company, all they have to do is pay to have these people brought in, and they get all this publicity. It’s terrible for the actors, but I don't do any personal publicity anymore anyway."

Considering some of the allegations that are written about him, it is no wonder why Hackman does not like to do publicity. Trained to go for dirt in any situation, especially during "on the set" interviews, reporters have stated that Gene Hackman is everything from "temperamental" to "impatient."

"It's probably accurate. The movie business is very stressful, and a lot of times people doing interviews hang around sometimes for a couple of days before they talk to you, or even after they talk to you. You just forget they're there, and you say something, or you're impatient or tired or whatever else. Then they write that.

"That's all right. I don't care. Sure, I get frustrated and angry or upset and all that. A lot of times, you're working with maybe a poor script or inexperienced people or whatever else. So, a lot of it falls on your shoulders, because if you're starring in a film, then it's really your responsibility to make it happen. You can't just say, 'Hey, I'm just an actor. I'm just passing through here.' You do take it upon yourself to try to make something work.

"A lot of pictures, I just do them, and then I walk away, although sometimes I do publicity for them. But most times, I try not to," he says with a chuckle.

One may then wonder why Hackman would choose to work on such projects. It is a speculation that amuses him.

"I feel that I’ve paid my dues here in New York for twenty-two years before I moved out to La-La Land, and if I feel like taking a movie because of the location or the money or the co-star or the director, I can do that. It's my career. You have to be somewhat mindful of what you do career-wise. I’ve done some films that I'm not too proud of." Hackman then starts laughing, "But, I’m not going to tell you what they are!"

For many years, critics and reporters have labeled Gene Hackman as the ideal "Everyman." But while census reports describe the average man as being five foot nine with dark brown eyes and twenty pounds overweight, Hackman--who is over six feet tall and a well-built, solid man with ocean blue eyes--is still considered the one actor who can play "average Joes" better than anyone else around today.

"I suppose it has something to do with the number of roles that I’ve played that are common guys, and that maybe I’ve done them in an okay manner. So, people then think that I am synonymous with that kind of common guy. I would prefer that..." He stops, then smiles and says, “It’s a little demeaning sounding, but I know that people mean well by it. So, I don't care really." His smile turns to laughter. "It’s okay.

"It is kind of fun though to play a common man put in an uncommon situation because then you are obligated to perform in some kind of way that is not usual for your character. It’s not like a guy who's a soldier of fortune being put into a situation where he's in danger because that’s not terribly interesting."

It is expected that critics and the public have always had complimentary words to say about Hackman's work. Yet when other famous performers say who their favorite actor is, and who they aspire to be as good as, you’ll hear the name "Hackman" right along with Hoffman, Dean, Nicholson, DeNiro, Brando, and Pacino.

“It’s nice if another professional, who you think is a pretty good actor, says that he thinks you're a good actor. That makes you feel good."

Pretty soon Gene Hackman may be allowing us to see more than just his talent as an actor. Given the right project, we may see the credit: "directed by Gene Hackman."

"I would like to direct because I feel like I have something to say more than just as an actor. But the problem with directing, in films at least, is that it's very complicated. You're dealing with a lot of money--twenty, thirty million dollars of somebody else's money. You are dealing with a lot of personalities, and you work under a great deal of stress. So unless it's something that I really am crazy about doing, or really want to do with some passion, I don't need the job.

“I've taken things under option that I could have done, and for a variety of reasons, I've backed out of them. Like for instance, The Silence of the Lambs, I felt finally that it was just too violent. It turned out to be quite a good movie, and I thought it would be, too. But I had bought that book originally and felt good about it for a while. Then the more I looked into it, the more I felt that I couldn't do it.”

Even with his professional acknowledgements and the great parts he has played under his belt, Hackman does not take his talent for granted.

"I think that if you've done your best work, then you're on your way down. You always think in terms of that your best work lies ahead of you, that you're maturing and growing as an actor, and that you still have something to offer. It's really that simple."

Although Hackman has already given us dozens of memorable screen performances (forty-five of them are currently available on video!), it is our pleasure to know that he continues to be dedicated to his craft and enjoys entertaining us. When you combine that with his unpretentious and down-to-earth personality, it is easy to see why audiences can never get enough of Gene Hackman. AAA

© Copyright 2019 All About ACTORS All Rights Reserved. Photo provided by the actor or his representatives

No comments made yet. Be the first to submit a comment
Copyright © 2020 All About Actors. All Rights Reserved.
Joomla! is Free Software released under the GNU General Public License.